Amazing Things Happening in the World of Robots

Did you ever think robots would be able to literally out run humans? Or be able to carry 400 lbs packs through 20 miles of rough terrain? Boston Dynamics did and they’ve made these creations come alive. 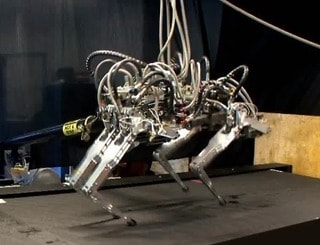 Cheetah robot on a tredmill

Watch this video, posted on cnn.com, that shows an amazing breakthrough in robotic technology.

These robots can run faster than Usain Bolt at 28.3 MPH, walk in a straight line, jump over obstacles, and right themselves when they’re kicked or fall down on the ice! Absolutely amazing!

Watch the video here on cnn.com.

If you want to read more, click on the following links:

The outdoor version of the robot, which currently runs on a tredmill with an off board power supply, will be ready to test outdoors next year. Wildcat, the prototype, will hopefully evolve into a robot that can carry supplies to troops in battle zones or be sent into battle itself. This is currently funded by the US military.

What are your thoughts? Is this awesome or scary; the hope for the future – like seeing eye dogs that need no training – or the eventual demise of the human race as ROBOTIC ANIMALS TAKE OVER THE WORLD!?!?! Or am I letting my imagination run wild? You be the judge.