Welcome to the 2023 First Robotics build season! The BEAST team is hard at work learning the rules and regulations for this year’s competition, called “2023 CHARGED UP presented by Haas,” which encourages participants to think about “future energy sustainability.”

During a match, two competing alliances must collect game pieces to “bring energy to their community.” Game pieces are retrieved from substations or picked up from the field. They are scored when they are added to a node on the grid. The robots will need to move quickly to collect the game pieces and have the precision to accurately place the game pieces on the nodes. The game pieces are shaped as either cubes or cones, so the robot will need enough dexterity to pick up the different shapes. 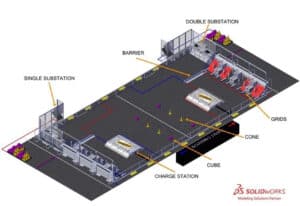 In the final moments of a match, alliance robots must dock and engage on a platform called a Charging Station. The Charging Station is angled and pivots up to 15 degrees, so when a robot drives onto the station to dock, it will tilt from the weight of the robot. This will challenge both the driver of that robot, and the drivers of the other robots that also need to dock on the same Charging Station. The software and controls team will work on automating this balancing act.

Each match begins with a 15-second autonomous period, during which the robots are run by pre-programmed instructions rather than being controlled by a driver. The software team will tackle not just the programming of the robot and the arm, but also create a program for the autonomous period that allows the robot to leave the starting point, retrieve a game piece and place it on the grid, and also dock and engage on the Charging Station.

The game animation for Charged Up can be viewed here:
2023 FIRST Robotics Competition CHARGED UP presented by Haas Game Animation

During the coming weeks, the team will continue to review and study the game rules to best implement an efficient robot design. They will evaluate the benefits of a telescoping arm vs an articulating arm to best collect game pieces. They also will decide what is needed for an effective practice field so robot prototypes can be tested.

In past couple of seasons, the team has shared space with Brookfield East’s drama department, building practice fields in the drama department’s black box theater. This meant occasionally working in very tight quarters alongside the drama department’s sets. Thankfully, the Elmbrook School Board approved the construction of a Large Learning Space, which will provide a dedicated practice space for our team. The space will also provide a classroom for future courses that include robotics and automation elements. The renovation is scheduled to be completed by December 2023. Thank you to all the mentors and students who attended board meetings, met with board members, and successfully championed this project.