Last week, BEAST Robotics took a team photo, including both students and mentors. We’re so thankful for the guidance and support that our mentors provide!

The Dean’s List Award recognizes the leadership and dedication of FIRST’s most outstanding students. Each team may nominate two students from the 10th or 11th grade. BEAST is proud to announce our nominees, Nathanael Ren and Alek Olson! 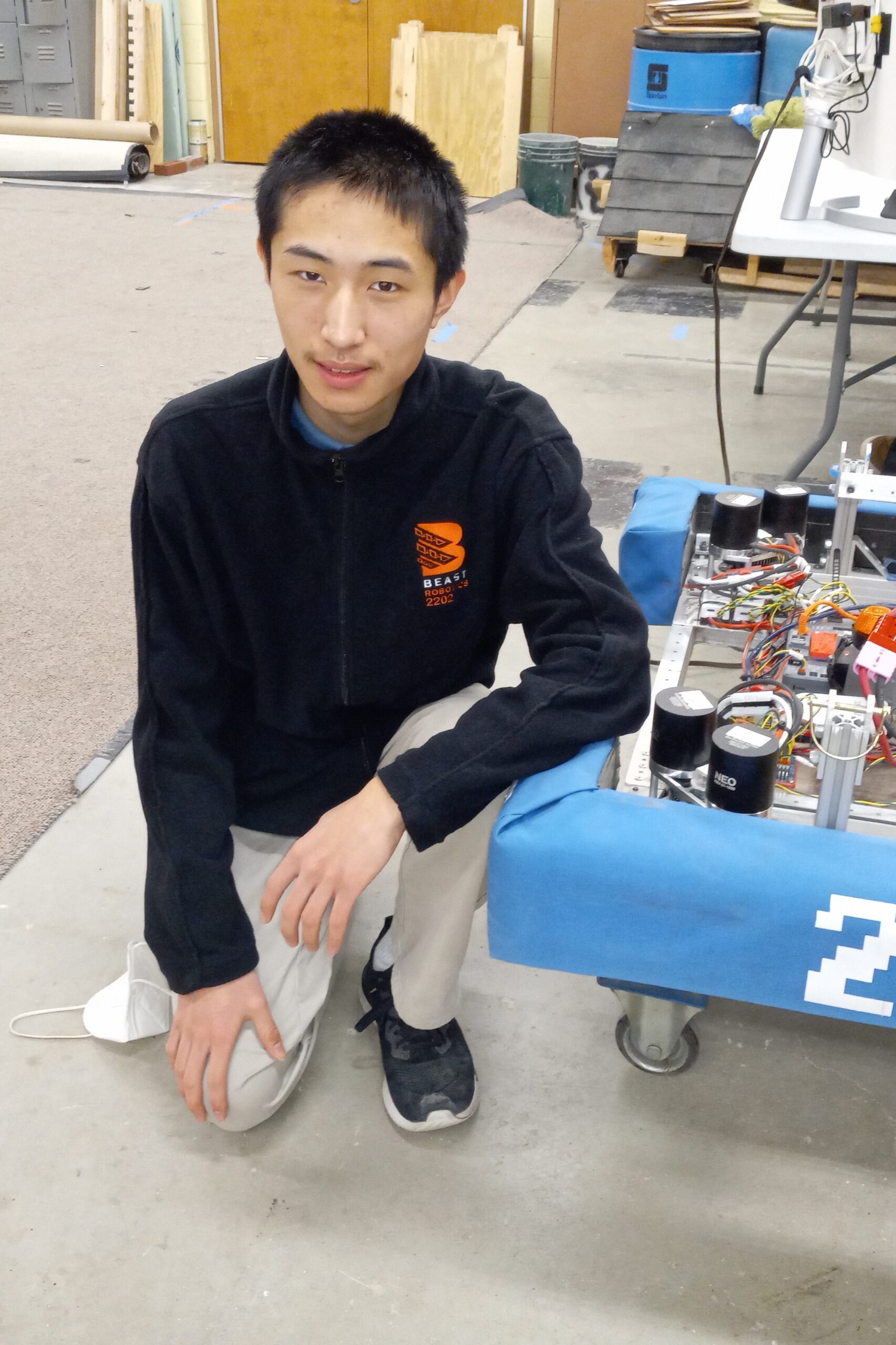 Nathanael is a junior, and this is his third year on BEAST. Nathanael is a FIRST success story, having participated in FIRST Lego League (FLL) and FIRST Tech Challenge (FTC) prior to joining FIRST Robotics Competition (FRC)! Nathanael is a Programming Team Lead, and in the summer, he Co-Leads BEAST’s STEM Camp. Nathanael is also a student mentor for the GEarheads. 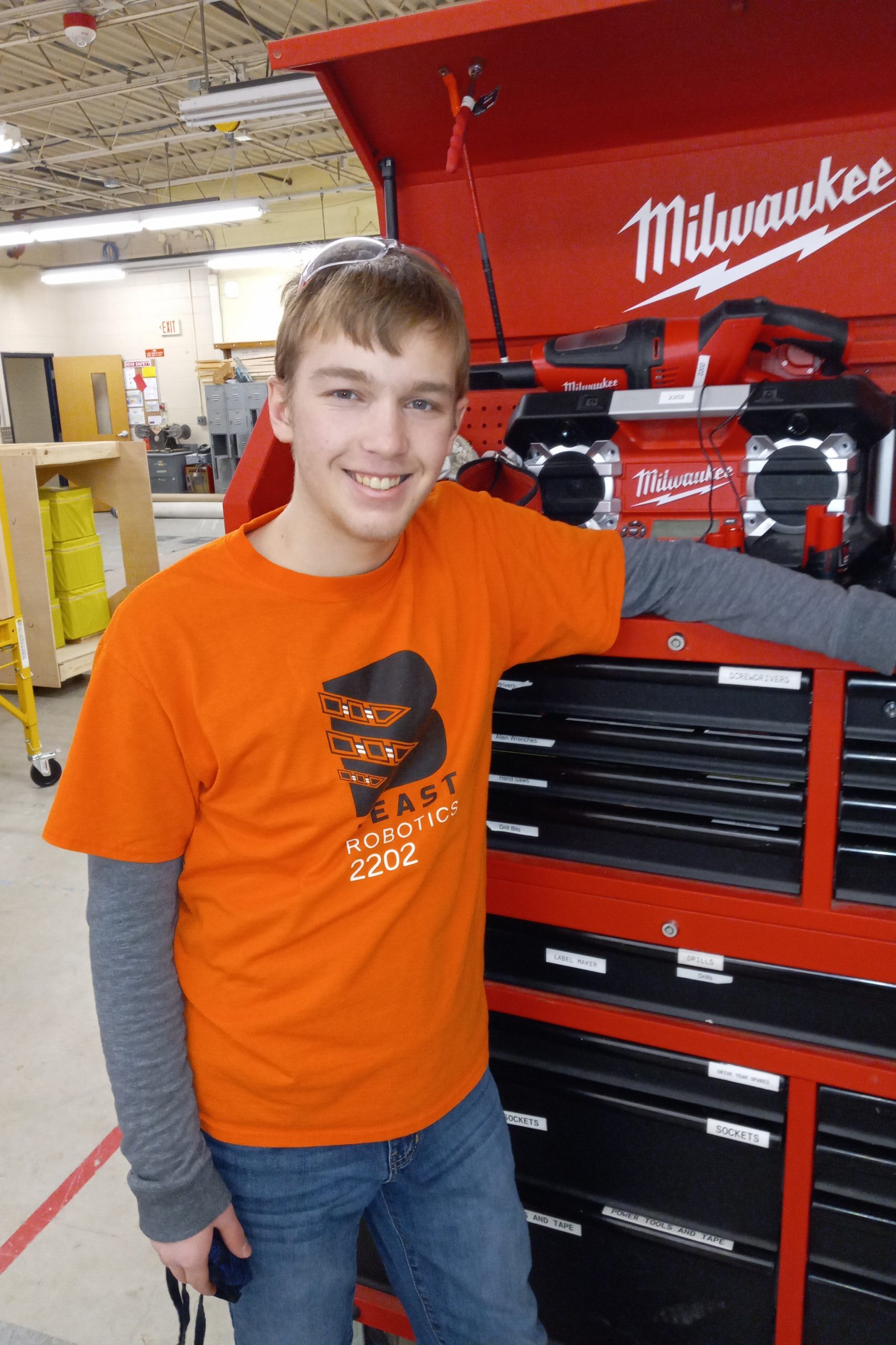 Alek is also a junior, enjoying his third year on BEAST. When Alek was in fifth grade, he attended BEAST’s very first summer STEM Camp. That inspired him to later join FTC 13201, Team Hazmat, and then BEAST. Alek was BEAST’s Safety Captain during the first year of the pandemic. Alek is a member of the Drive Team, and last year he drove us to our Finalist standing in the At Home Challenges! Alek also trains our pipeline of new drivers.

We wish Nathanael and Alek luck as they compete for the Dean’s List Finalist Award at the Wisconsin Regional at the end of March.

The team has created prototypes of the intake, indexer, and shooter. These components have been successfully attached to the chassis, along with supports for the hanger. The hanger mechanism has progressed from prototype to final version. The team is busy integrating components and improving the overall design. The goal is to have a fully functional robot by February 13 so there is time to test it before the Sussex Scrimmage on February 20. This schedule will also allow the drive team to practice with the robot. Until now, the drive team has been practicing with the swerve-drive chassis developed in the off-season. 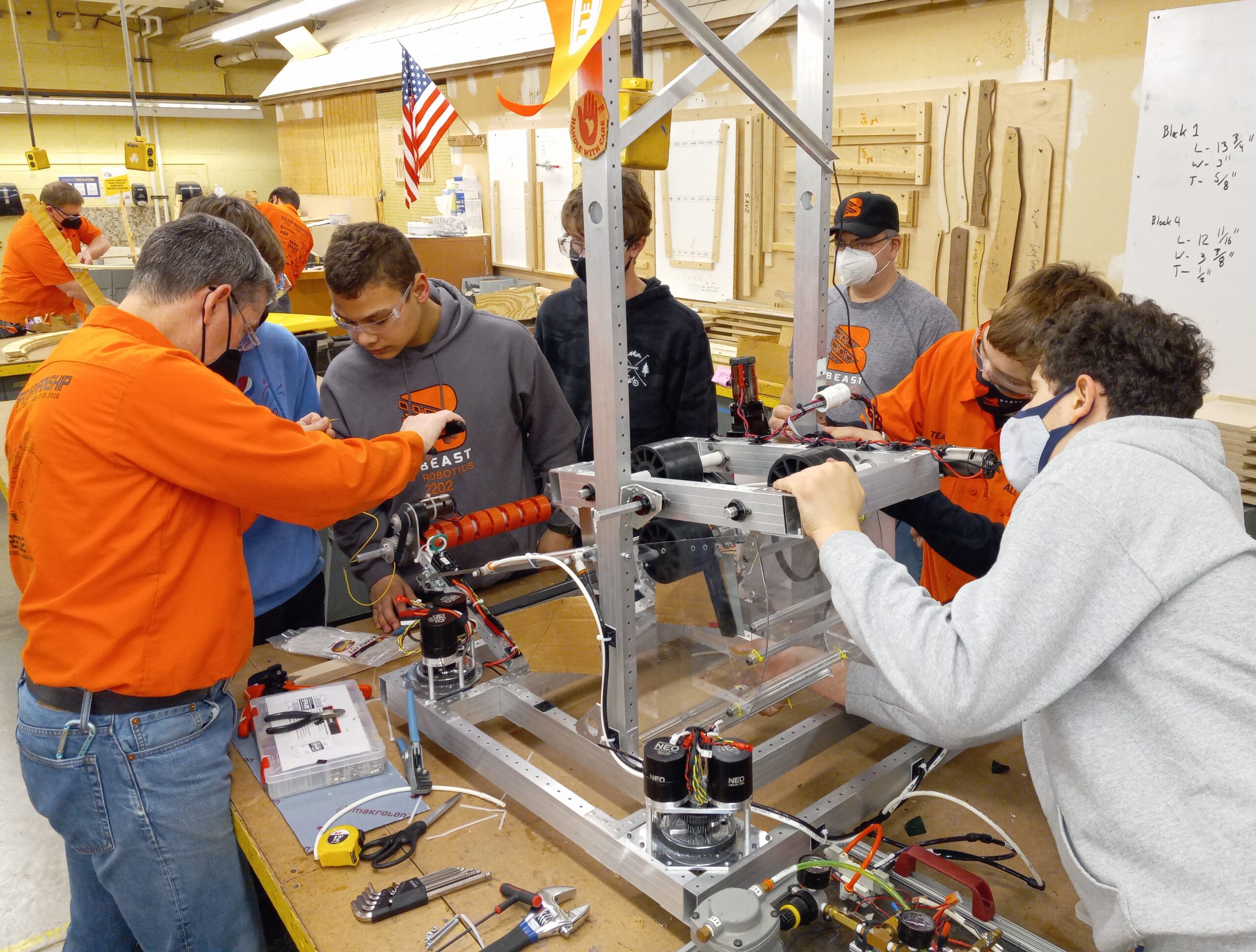 The Mechanical Team is using a CAD program called Onshape for their designs. They created an intake, indexer, and shooter. These components were mounted to the chassis and tested. The team is machining custom guards and brackets so the cargo doesn’t roll out of the intake. They are also working on a method to connect the intake to the indexer. The final hanger mechanism is being fabricated in the shop. The team members working on the hanger completed the outer sleeves and are assembling them so they can build the inner telescoping portion of the arms. 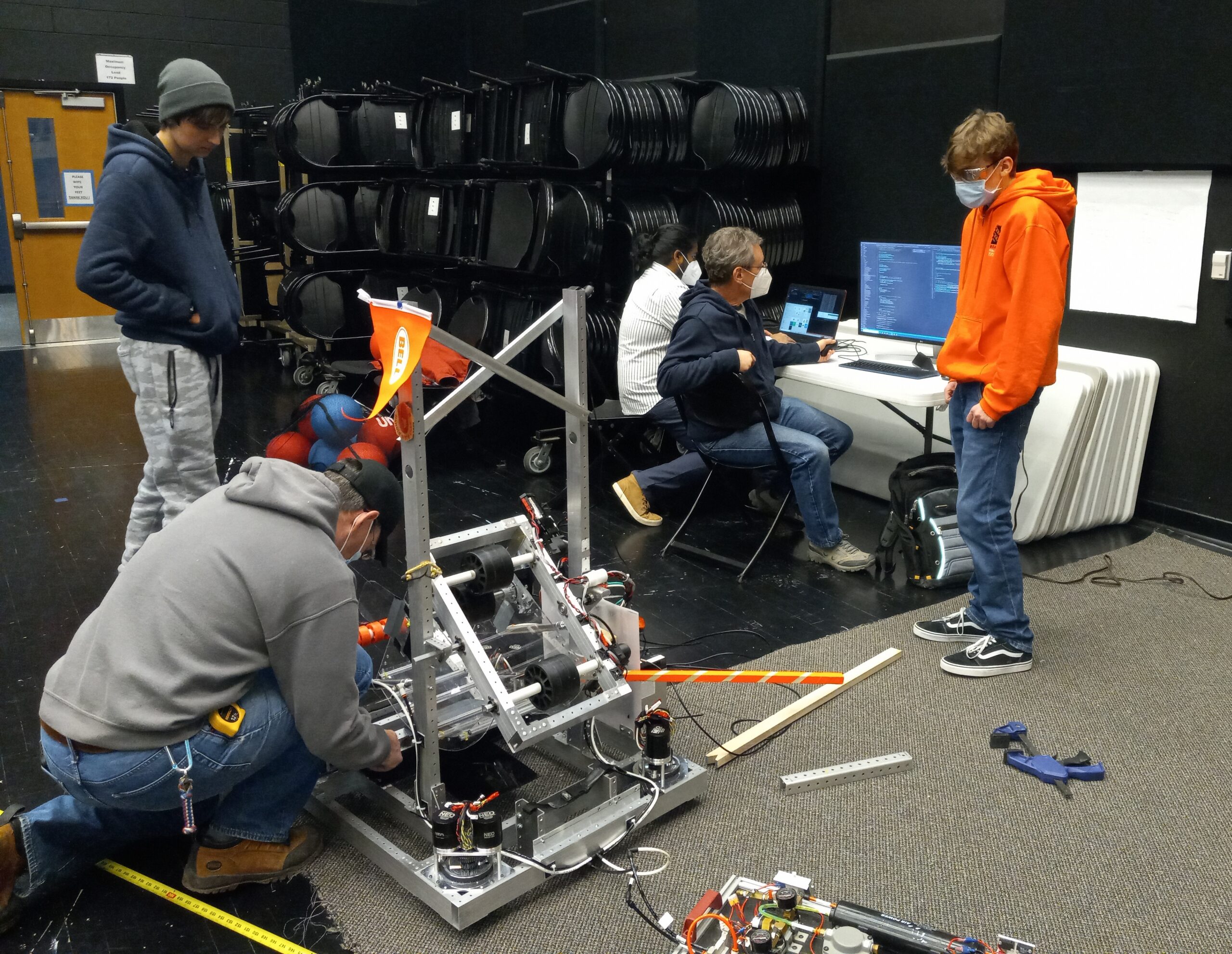 The Programming Team is tuning the robot so it will track to a target in a smooth and predictable way. They are also focused on writing the program for the operation of the indexer. 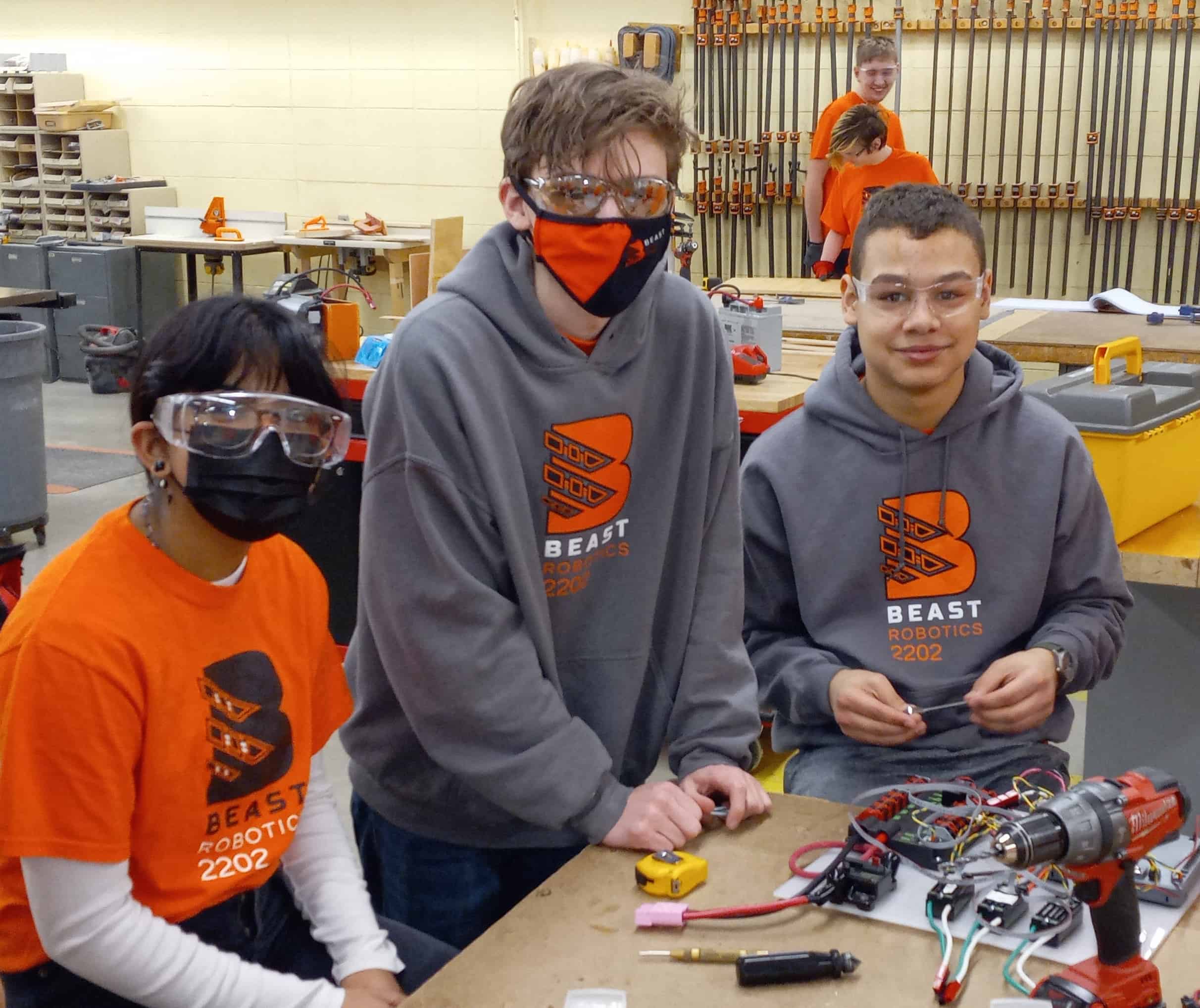 The Electrical Team has put all the electrical components together on one board. They call it a “bot on a board,” which helps keep all the electrical wiring for the robot in one, easily accessible place while testing the prototype. They have also been working on adding pneumatics to the robot. 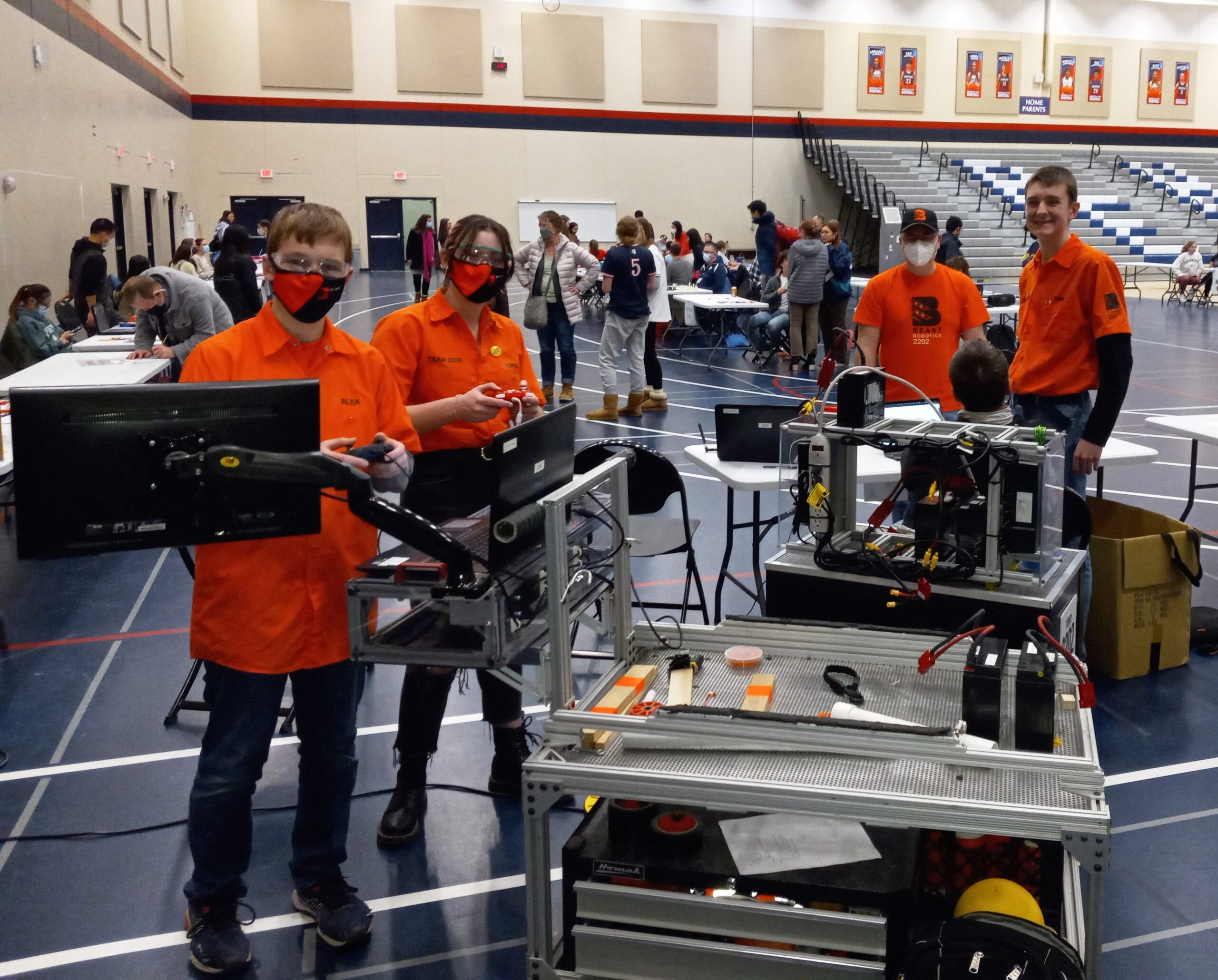