FIRST Past Challenges and Field Layouts

In INFINITE RECHARGE, two Alliances work to protect FIRST City from approaching asteroids caused by a distant space skirmish. Each Alliance, along with their trusty droids, race to collect and score Power Cells in order to energize their Shield Generator for maximum protection. To activate Stages of the Shield Generator, droids manipulate their Control Panels after scoring a specific number of Power Cells. Near the end of the match, droids race to their Rendezvous Point to get their Shield Generator operational in order to protect the city!

In DESTINATION: DEEP SPACE, Presented by The Boeing Company, we join two competing alliances collecting samples on planet Primus. Unpredictable terrain and weather patterns make remote robot operation essential to their mission on the planet. With only 2:30 until liftoff, the alliances must gather as many cargo pods as possible and prepare their spaceships before the next sandstorm arrives.

FIRST POWER UP, the 2018 FIRST Robotics Competition game, finds our teams trapped in an 8 bit video game! Teams use power cubes to defeat the boss. Each three-team alliance has three ways to help defeat the boss:

FIRST STEAMWORKS, the 2017 FIRST Robotics Competition game, invites two adventure clubs from an era in which technology relied on steam power to prepare their airships for the ultimate long distance race. Each three-team alliance prepares to take flight in three ways:

3. Prepare for Flight. Adventure clubs want their robots to climb aboard their airships so they can assist the pilots during the race.

Alliances of three robots are on a Quest to breach their opponents’ fortifications, weaken their tower with boulders, and capture their tower. Robots operate independently for the first 15 seconds of the Quest. Alliances score points by reaching opponents defenses, crossing defenses, and scoring boulders through goals in the opposing tower. Human drivers take control for the final 2 minutes and 15 seconds controlling their robot to defend their castle, retrieve boulders, defeat defenses, score goals from the opponents’ courtyard in tower, and capture and scale the opponent’s tower.

RECYCLE RUSH is a recycling-themed game played by two Alliances of three robots each. Robots score points by stacking totes on scoring platforms, capping those stacks with recycling containers, and properly disposing of pool noodles, representing litter. In keeping with the recycling theme of the game, all game pieces used are reusable or recyclable by teams in their home locations or by FIRST at the end of the season.

AERIAL ASSIST is played by two competing Alliances of three robots each on a flat 25’ x 54’ foot field, straddled by a truss suspended just over five feet above the floor. The objective is to score as many balls in goals as possible during a two (2)-minute and 30-second match. The more Alliances score their ball in their goals, and the more they work together to do it, the more points their Alliance receives. 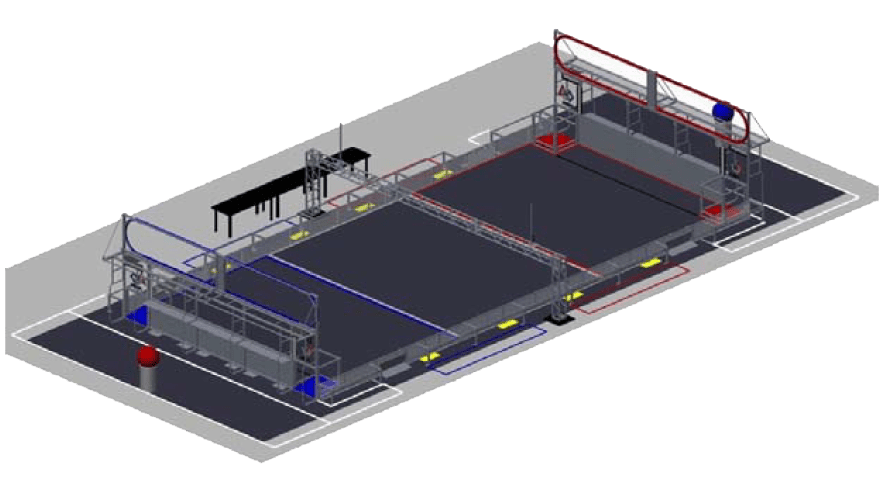 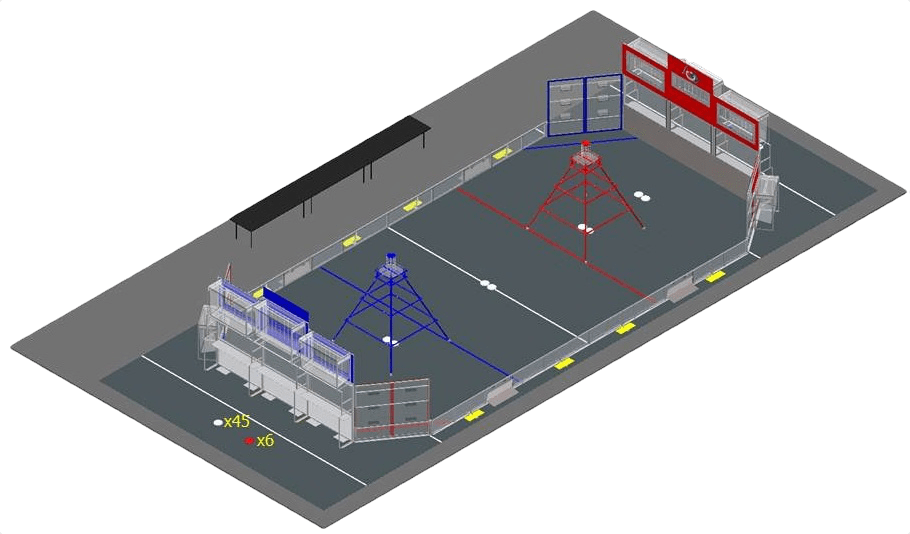 ULTIMATE ASCENT is played by two competing alliances on a flat, 27 x 54 foot field. Each Alliance consists of three robots, and they compete to score as many discs into their goals as they can during a two (2)-minute and fifteen (15)-second match. The higher the goal in which the disc is scored, the more points the Alliance receives. The match begins with a fifteen (15)-second Autonomous Period in which robots operate independently of driver inputs. Discs scored during this period are worth additional points. For the remainder of the match, drivers control robots and try to maximize their alliance score by scoring as many goals as possible. The match ends with robots attempting to climb up pyramids located near the middle of the field. Each robot earns points based on how high it climbs.

Rebound Rumble is played by two competing Alliances on a flat, 27 x 54 foot field. Each Alliance consists of three robots. They compete to score as many basketballs into their hoops as they can during a 2 minute and 15 second match. The higher the hoop in which the basketball is scored, the more points the Alliance receives. The match begins with a 15-second Hybrid Period in which robots may be controlled using a Microsoft Kinect. Baskets scored during this period are worth extra points. The match ends with robots attempting to balance on bridges located at the middle of the field. In Qualification Matches, a robot from each Alliance will also try to balance on the white Coopertition™ bridge to score additional ranking points for each Alliance. 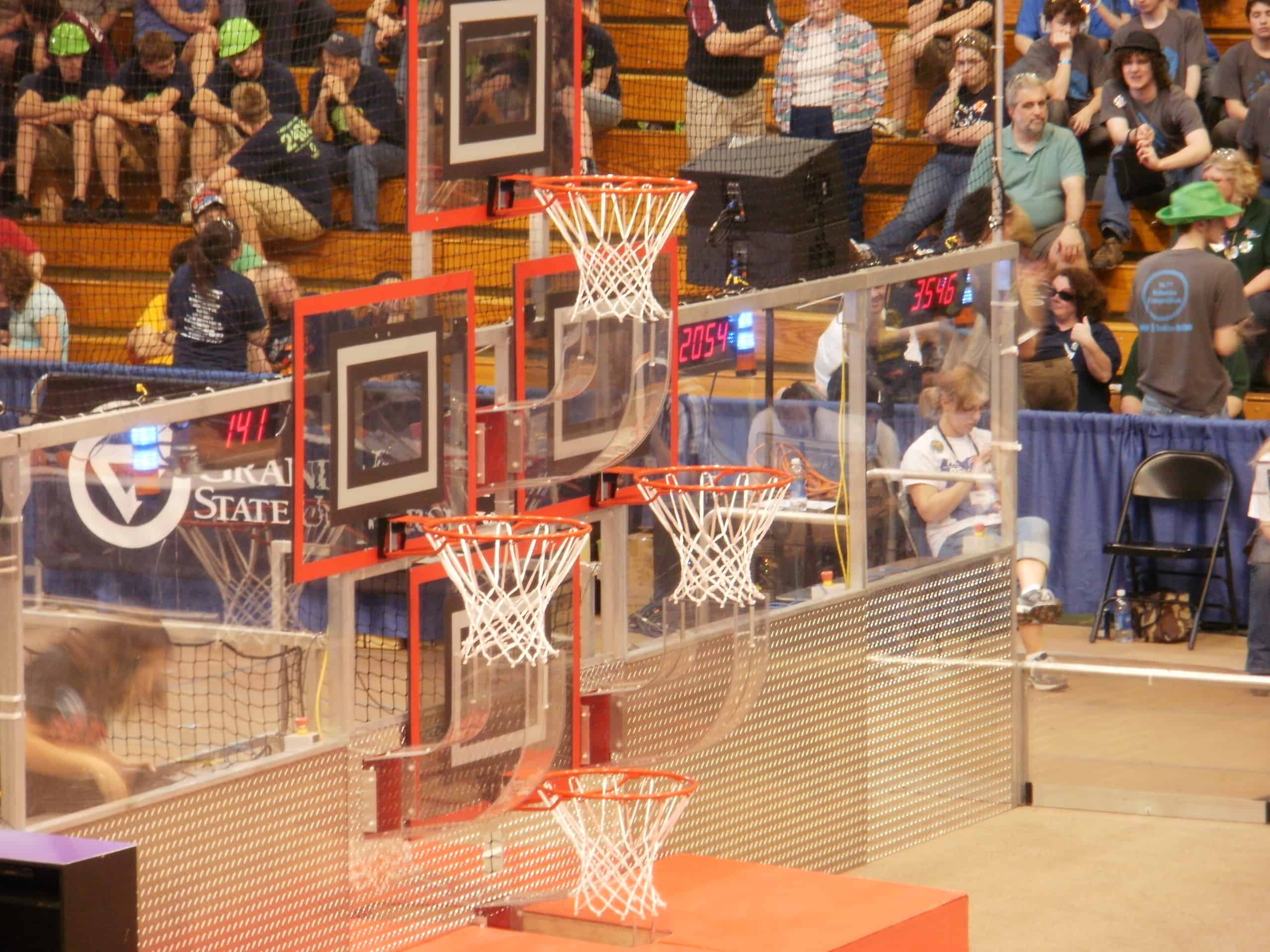 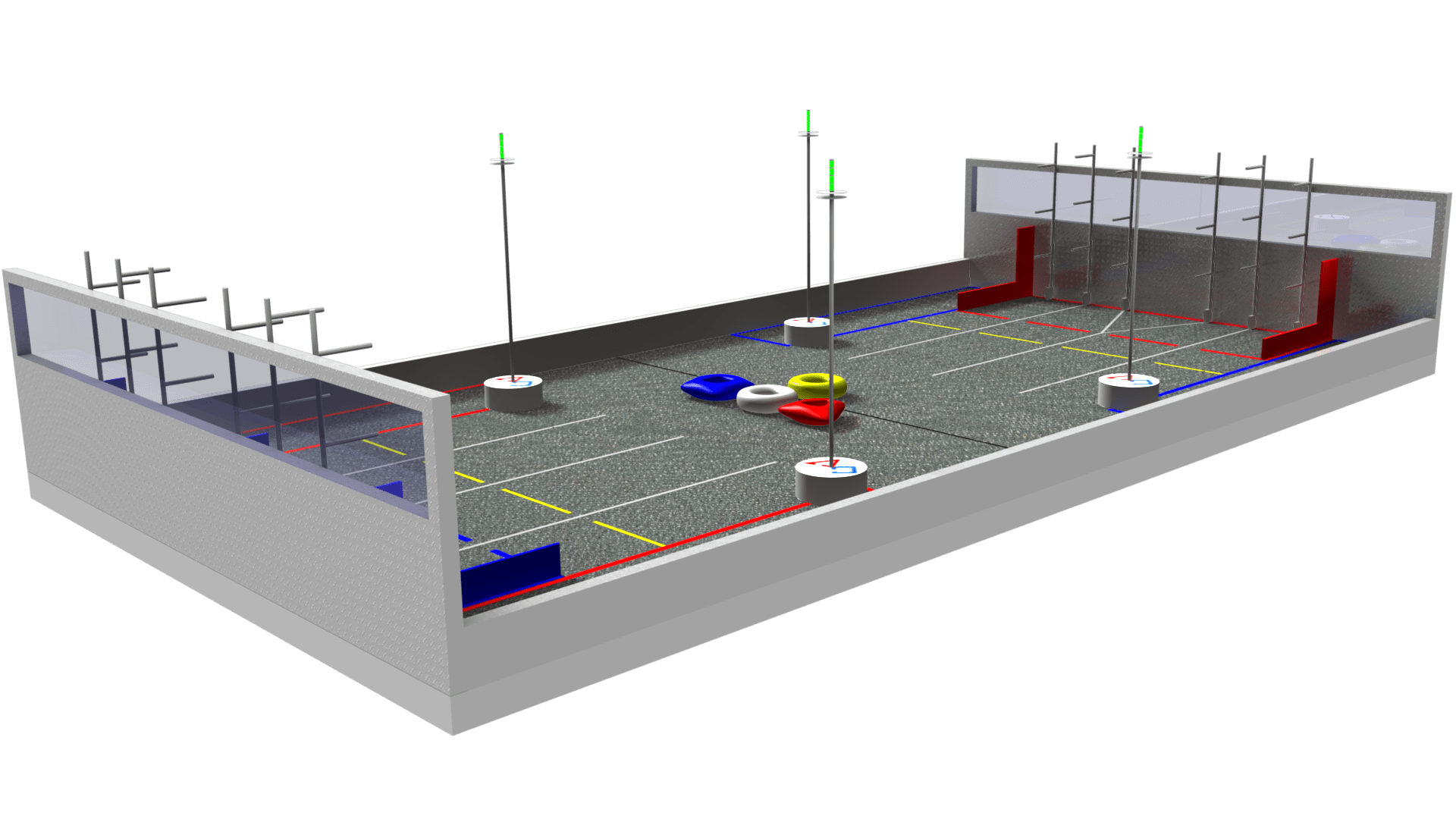 In the 2011 game, LOGO MOTION™, two alliances of three teams compete on a 27-by-54-foot field with poles, attempting to earn points by hanging as many triangle, circle, and square logo pieces as possible. Bonus points are earned for each robot that can hang and assemble logo pieces to form the FIRST logo. Robots can also deploy Mini-Bots to climb vertical poles for a chance to earn additional points.

In the 2010 game, BREAKAWAY®, two alliances of three teams compete on a 27-by-54-foot field with bumps, attempting to earn points by collecting soccer balls in goals. Additional bonus points are earned for each robot suspended in air and not touching the field at the end of the match. 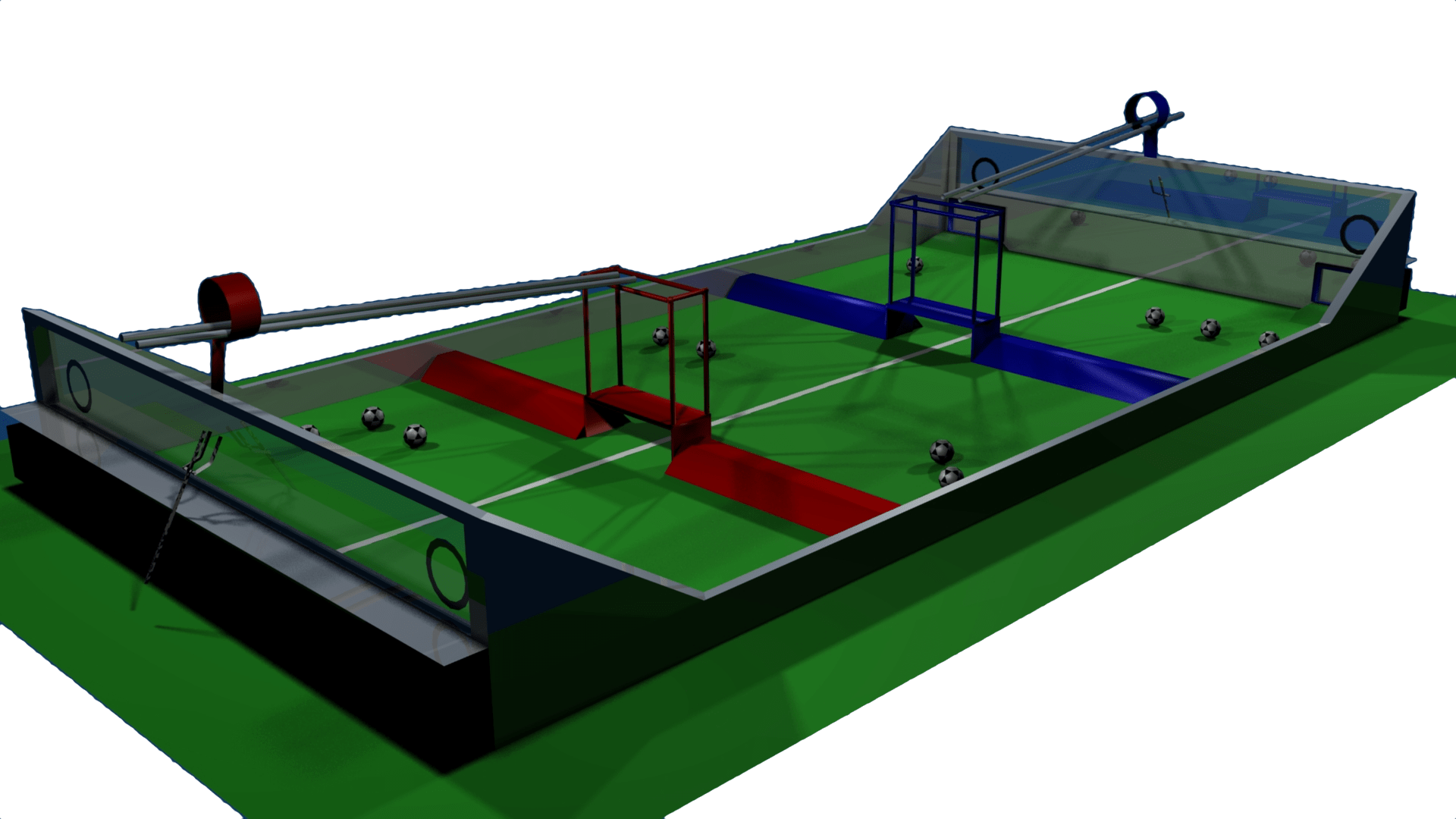 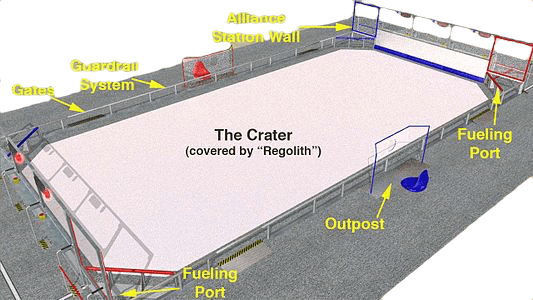 In the 2009 game, LUNACY®, robots are designed to pick up 9″ game balls and score them in trailers hitched to their opponents‟ robots for points during a 2 minute and 15 second match. Additional points are awarded for scoring a special game ball, the Super Cell, in the opponents’ trailers during the last 20 seconds of the match. “LUNACY” is played on a low-friction floor, which means teams must contend with the laws of physics.

In the 2008 game, “FIRST Overdrive,” students’ robots are designed to race around a track knocking down 40″ inflated Trackballs and moving them around the track, passing them either over or under a 6’6″ overpass. Extra points are scored by robots positioning the Trackballs back on the overpass before the end of the 2 minute and 15 second match. 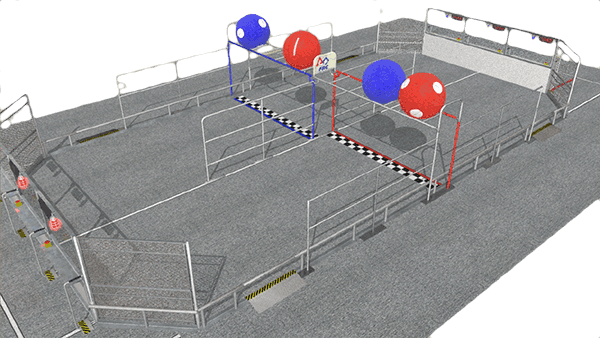 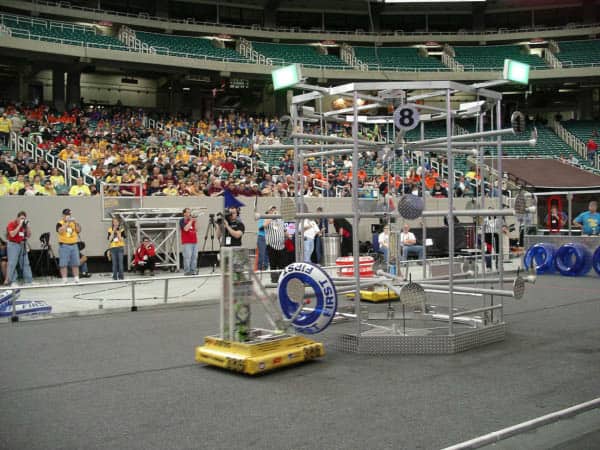 In the 2007 game, Rack “N” Roll, students robots are designed to hang inflated colored tubes on pegs configured in rows and columns on a 10-foot high center “rack” structure. Extra points are scored by robots being in their home zone and lifted more than 4” off the floor by another robot before the end of the 2 minute and 15 second match.