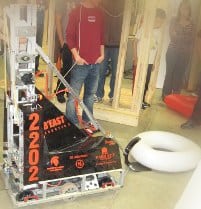 Brookfield East Alum Dan Mueller, who saw the FIRST competition as a great opportunity, founded Team 2202 in 2006. Just a few weeks into the school year, Team 2202 had already grown to 26 members, 22 students and four mentors. The months prior to the first competition were spent fund raising, writing letters for sponsorships, and familiarizing the team with tools and materials needed to build a robot. Once the competition began, the team met four times a week for six weeks in order to complete the robot. The first time competing was at the 2007 Milwaukee Regional at the U.S. Cellular Arena where the team placed 9th out of 52 teams. The team saw this as a great accomplishment for its rookie year and used this as motivation to do better at the 2008 competition.

The first meeting for Team 2202 was held in one of the mentors’ basements and during the whole first year, the only space the school allowed the team was a locker and a cabinet in the wood shop. After a successful rookie season, the team took over some storage space in the second year and cleaned it up, fixed up old machines, and began to build their machine shop. Over the years, the space grew and Team 2202 now has their own designated space in the wood shop, complete with tools and storage space for the robots.

Starting the 2012 Season, the B’East Robotics Team 2202 is growing and has 27+ student members and 9 mentors. During preseason, the team meets to discuss the last season and work on training the noobs (new members) and get them familiarized with materials, tools and the robot building process. Meetings are once a week on Wednesday nights, for at least two hours, working on getting things organized and prepping the shop for the build season.

During the build season, meetings are Mondays, Wednesdays and Fridays, usually about three hours long, and also on Saturdays for about five hours where most of the work is completed (and snacks are eaten). Members are encouraged to show up at every meeting to help ensure that everyone is at the same pace with the plans and continuously learning new things.

Members begin the robot building process by first brainstorming, then prototyping, then improving ideas, and finally beginning the actual building of the robot out of parts consisting from washers to extruded aluminum.

Near the end of the build season, the team heads over to the Sussex Hamilton High School for a practice competition. This is also where teams can see other teams’ robots and ideas at work in person.

After packing up the Beastly, 2202’s robot, in the shipping crate and sending it over to the U.S. Cellular Arena, there is usually have a weekly meeting to prepare the team for the competition and talk about what can be improved on next build season.

The last few years have been increasingly better than the last. In the 2011 Logomotion Challenge, 2202’s best year yet, the team went undefeated in the practice rounds and placed 3rd overall at the Milwaukee Regional at the U.S. Cellular Arena. During this competition, Team 2202 was recognized and received the GM Industrial Design Award, the team’s first award since the rookie season.

When the competition has passed, and Beastly has been shipped back to the shop, the team takes the robot out of the crate and reorganizes and prepares the shop for a successful season next year.

Read all about our robot.