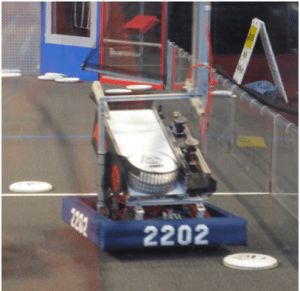 The 2013 season challenge was Ultimate Ascent. The objective of the game was to shoot Frisbees through multiple goals for varying points. There were three levels of goals; one high goal, one middle goal, and one low goal, each worth 3, 2, and 1 point respectively. The end game bonus was to climb a 90 in, three tiered metal pyramid, with varying points for the height that the robot reaches.

To launch Frisbees, we built a shooter made of two motors and pneumatic tires to get the Frisbees across the field of play and into their designated goal. To climb the pyramid, we used a design similar to a hook, so we could drive up to the pyramid at a decent speed, and simply hang.