The Robotic Cliff: Brainstorming and Decisions

A week after kickoff, we’ve come to a decision as to what method to pursue in the Robot Competition, but more on that later.

We spent the majority of today brainstorming and debating strategies and priorities, as well as potential solutions.

We created a decision matrix to break down the aspects of the game and determine the best strategy. It turned out that the game was designed very well, as both climbing and shooting had relatively equal potential. Many ideas were presented, and soon, members of the team gravitated into two factions: one favoring shooting as main priority and the other favoring climbing. Many hours were spent debating the merits of each plan and comparing them to our expected capabilities.  Many members were confident that their plan would be more effective. Those favoring shooting argued that creating a 30-point climbing robot would be a difficult build, while those who preferred a climbing robot countered that their favored strategy involved fewer variables and would be thus more consistent in its scoring.

The team voted on 3 decisions. We decided to vote that day, to vote in the next 15 minutes, and finally, to prioritize shooting over climbing. More importantly, we agreed that we would be graciously professional about the decision, and that we would do whatever we can to make the best of the parameters we had set for ourselves. That is the nature of the industry and life in general: when the conditions have been set, it is not the time to look back regretfully, but to look at what can be done, at the moment, to make the best of the situation. In this light, the decision itself is something of an afterthought, what matters is to learn from the experience.

Bolstered by the clarification of team priorities, we divided into sub-teams to start working on more detailed solutions and proofs of concept: shooters, climbing, loading, driving, and vision.

At this point, our team is moving from the brainstorming and strategic parts of the design process into the nitty-gritty, and we’re all excited about what the next week will bring. 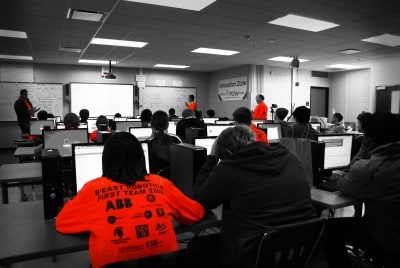